MOJCA ARGERE DICH NICHT : At the performance the two naked artists and the curator were playing Ludo (Mensch agrere dich nicht). The adaptation of Duchamp playing chess with a nude model. 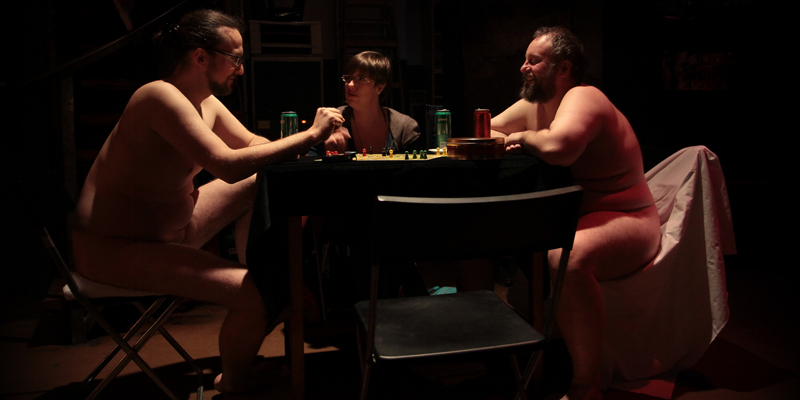 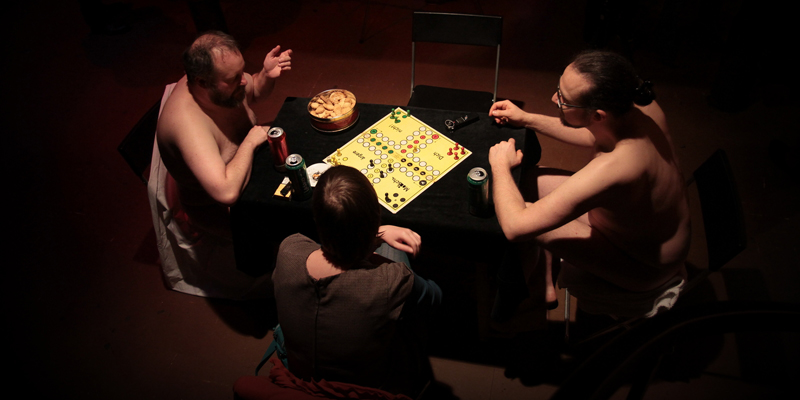 Marcel Duchamp and Eva Babitz’ performance documented by Julian Wasser took place in Pasadena Museum of Art in 1963, together with a retrospective exhibition of M. Duchamp. Wider known as ‘The game of chess with a naked model’, the performance has been provocative since its inception. Petja Grafenauer, Simon  Macuh in Zoran Srdić Janežič have re-conceptualized it by employing a table game Ludo.

The performance has a critical social component. It refers to Municipality Ljubljana official’s attack on the cultural institutions for exhibiting art with naked and half-naked female bodies. Therefore, the performance is dedicated to the city official in question.

The performance subverts the roles portrayed in Duchamp’s performance. Instead of a privileged white male artist, controlling and dictating the whole situation, the woman is now in the position of power. Naked men alongside a dressed female curator make us think about the depiction and lack of male nakedness, and challenge the hypocritical conventional reasoning about the appropriateness of female nudity in various contexts. The transformation from the real (nakedness as a lack of clothes) to the ideal (nudity) and to the ideal art form of the female nude in Western tradition (still uncritically accepted today in advertising) does not happen in this performance. The nudity here is real and the performers make a statement about the atmosphere in Slovenia, where female nudity in this year has been numerously publicly attacked.